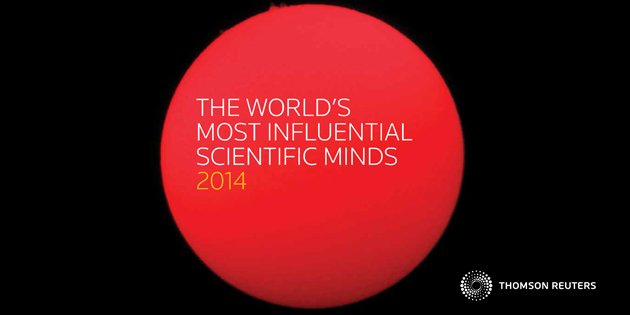 “The World’s Most Influential Scientific Minds 2014” report by Thomson Reuters has just been published. The report aims at identifying who are some of the best and brightest scientists of our time. Thomson Reuters analyzes data over the last 11 years (2002-2012) using its Web of Science and InCite platforms to identify highly cited scientists in:

A directory of some 3200 individuals who published the greatest number of highly cited papers in one of the above 21 broad fields has been established in this way. As far as physics is concerned, papers with over 500 authors (for instance by the large CERN collaborations) are excluded from this Thomson Reuter analysis given the impracticality of featuring all the deserving names.

Among the listed 100 top scientists in physics, one finds Immanuel Bloch (Germany), Eugene Demler (USA), Tilman Esslinger (Switzerland), Massimo Inguscio (Italy), Wolfgang Ketterle (USA), Maciej Lewenstein (Spain), Jun Ye (USA) and Martin Zwierlein (USA). Why quoting them? Because all of them have been main characters at the 191st Course on “Quantum Matter at Ultralow Temperatures” of the SIF International School of Physics “Enrico Fermi”, which just took place on 7-15 July in Varenna, Lake of Como.

Congratulations! In particular to the (only) Italian of the list, Massimo Inguscio, who was also, together with Wolfgang Ketterle and Sandro Stringari, co-Director of this ultrashining School Course.