The foundation of the EPS: A case of science diplomacy 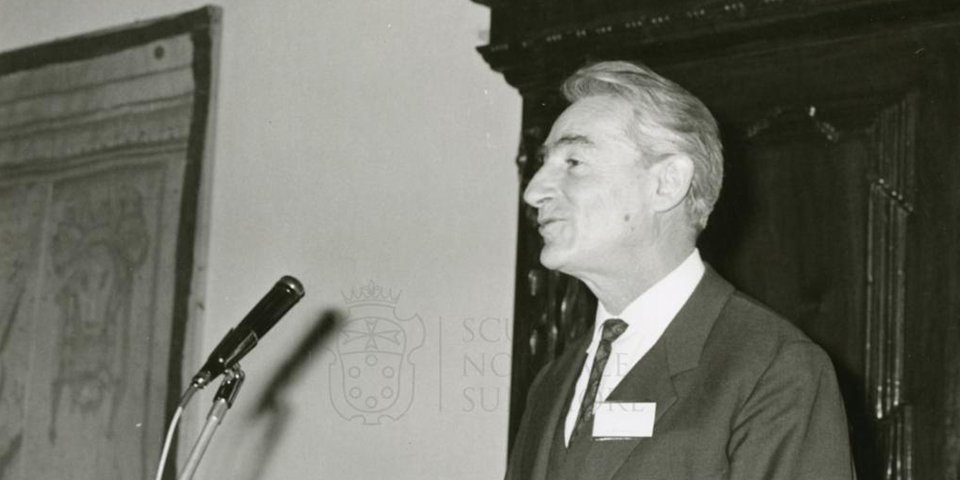 Gilberto Bernardini, then president of the Italian Physical Society, addresses the audience at the Meeting on European Collaboration in Physics, held in Pisa on April 16-17 1966. The meeting, organized by the Scuola Normale Superiore and the Italian Physical Society, was a crucial step in the foundation of the EPS. Courtesy Centro Archivistico Scuola Normale Superiore.

Amid social and political unrest across the globe, on September 26, 1968, sixty-two physicists gathered in Geneva to found the European Physical Society (EPS). Among these were the official representatives of the national physical societies of eighteen countries of both Eastern and Western Europe. At the time, it was one of the first international scientific institutions that was specifically European and at the same time transcended the Cold War political divide. And it was founded at a particularly dramatic historical moment: only one month after the armed invasion of Czechoslovakia by five countries of the Warsaw Pact.

The recent surge of interest in science diplomacy suggests a new historical perspective to analyze the foundation of the EPS, focusing on the interconnections between science and politics within the broader contexts of the Cold War and European integration. That the EPS was supposed to have a political function in international relations was emphasized in the public discourse by the main promoter of the society, Italian physicist Gilberto Bernardini (1906-1995), who became the first EPS president. Bernardini described the EPS as a contribution to the realization of the "cultural unity" of Europe, and, in this way, to the political unification of all Europe understood as "a single highly civilized nation". Taking this political ambition seriously, the foundation of the EPS can be interpreted as a case of science diplomacy where one intends the promotion of international scientific cooperation as a tool to indirectly condition international relations.

The analysis of as yet unexplored archival materials of Bernardini and other protagonists in the establishment of the EPS has enabled to elucidate how the involved physicists came to interpret their role as diplomats amidst particularly turbulent reconfigurations of international political relations. In the mid-1960s, the political ideal of a culturally unified Europe – promoted by supporters of Western European federalism– intertwined with the socio-professional interests of a specific physics community strongly involved with CERN. This interplay established the idea of physics as a diplomatic tool in the construction of Europe, and this idea became so widespread to lead to the successful proposal of a brand new society.

A few weeks before the establishment of the EPS, however, the invasion of Czechoslovakia led many of the Western physicists involved in this process to reframe the role of the society as a tool to diffuse liberal-democratic values, especially in support of physicists who were becoming political dissidents in Eastern Europe. This view of the EPS was actually realized in the early years after its foundation when the society became a translational network that supported Czech physicist František Janouch (b. 1931), who was suffering political discrimination in his home country since 1970. Following pressures by the EPS, Janouch was allowed to leave Czechoslovakia in 1973 and to accept a permanent position in Sweden, also secured by EPS officials. This development had political consequences, too: in Sweden Janouch founded the Foundation Charter 77 to provide financial support to the principal opposition group in Czechoslovakia in the latter years of the communist rule.