CRISPR, an amazing tool to discover and alter the genetic code of life 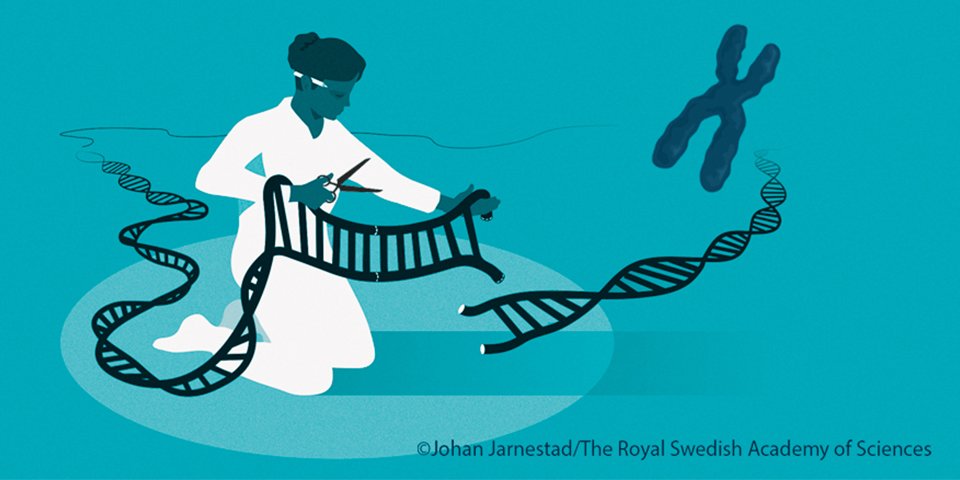 The Nobel prize in chemistry for 2020 has been awarded to the microbiologist Emmanuelle Charpentier and the biochemist Jennifer A. Doudna, for the development of the gene-editing tool CRISPR-Cas9. No one in the life sciences is surprised that the inventors have been awarded a Nobel Prize – their new tool represents a game-changer over previous gene-editing techniques in terms of speed, cost, and ease of use. Merely 8 years since its discovery, CRISPR-Cas9 has already become one of the most powerful tools in genetics, and its potential is increasing. Researchers all over the world are able to modify genes in a much greater range of organisms, and also to expand its use through innovations.

CRISPR is based on many years of research on the DNA of single cells: bacteria and archaea. Like technologies for molecular cloning using restriction enzymes (awarded a Nobel Prize, 1978), CRISPR is derived from a simple and efficient immune system found in nature. Bacteria use it to recognize specific DNA sequences in viruses; the Cas9 enzyme slices the sequences and eliminates the virus. Charpentier and Doudna modified CRISPR so that it can target any DNA sequence – and not only in bacteria, but in the cells of any living organism, including humans.

Once DNA has been sliced open, various things can be done. One application is to remove sequences and thus delete or “Knock Out (KO)” a specific protein. Another is to “knock in” a sequence, and add or change the code, sometimes just changing a few letters. This can be used to repair a gene or replicate a mutation found in a disease. Scientists can also change the DNA regions that control the production of proteins and alter their quantities, or to study non-protein-coding regions of genomes. There are many other uses: the technique can be used to eliminate the 20 000 genes in a human cell, and find those genes that are involved in particular cellular functions. CRISPR is so powerful that it is replacing earlier techniques like inactivating mRNA using miRNAs and siRNA (Nobel Prize, 2006).

Part of the power of CRISPR comes from adding it to existing techniques. For us biophysicists using light and electron microscopy imaging methods, it makes it easier to tag molecules with fluorescent modules such as GFP (Nobel prize, 2008). In combination with rapid improvements in microscope methods like super-resolution (Nobel prize, 2014), computational methods, and new types of detectors, microscopes have become even better discovery machines in life sciences. Before CRISPR it could take up to years to generate cells and animals with gene modifications and we much depended on expression of random insertion of a gene without eliminating the endogenous protein. It vastly simplifies the study of proteins and their normal regulation in cells and organisms and is speeding up discoveries in fields ranging from neurobiology, cell biology, physiology, plant sciences, to agriculture and medicine. Scientists foresee an enormous potential in future gene therapies, studies of rare genetic diseases and personal medicine.

The advent of such a simple, powerful gene modifying system does not come entirely without ethical concerns. As its safety and efficiency expand, it will be ever-more tempting to aim at humans; here, lawmakers will have to find ways to restrict unethical experiments, but that will not be easy as this is spread worldwide. CRISPR has rapidly become an indispensable part of our expanding range of biophysical, biochemical and cellular tools to explore living systems, and it opens such a wide door that it will be years before we truly grasp its full potential.