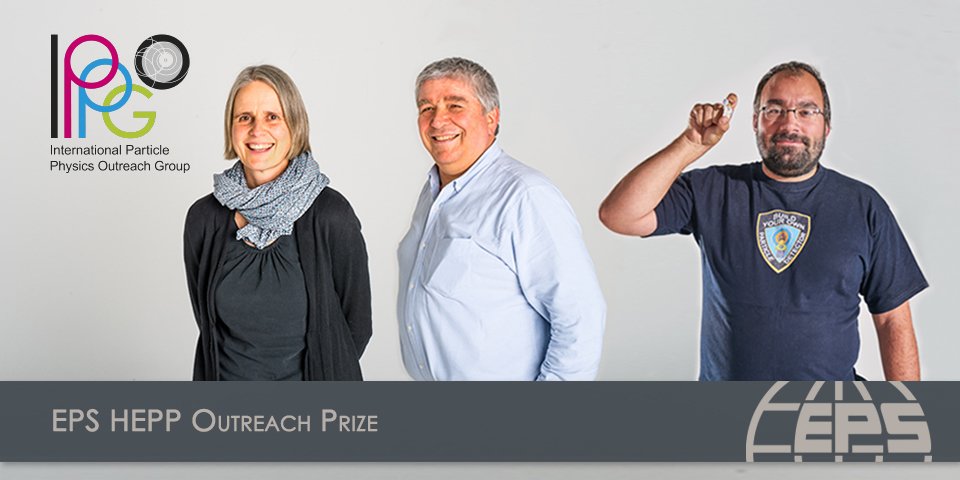 On May 31, 2021 the High Energy and Particle Physics Division of the European Physical Society (EPS) has announced the 2021 EPS HEPP prizes. In particular, the 2021 Outreach Prize for outstanding achievement in outreach, including education and the promotion of diversity, in connection with High Energy Physics and/or Particle Astrophysics was awarded to Uta Bilow and Kenneth Cecire  "for the long-term coordination and major expansion of the International Particle Physics Master Classes to include a range of modern methods and exercises, and connecting scientists from all the major LHC and Fermilab experiments to school pupils across the world", and to Sascha Mehlhase "for the design and creation of the ATLAS detector and other interlocking-brick models, creating an international outreach program that reaches to an unusually young audience".

Uta Bilow (Technische Universität Dresden) and Kenneth Cecire (University of Notre Dame) have been coordinating the International Particle Physics Masterclasses (IMC), the flagship activity of the International Particle Physics Outreach Group (IPPOG). High school students are invited to universities and research institutes for a day of immersion in particle physics; this includes analysing real data from an experiment and a videoconference at the end. Initially based on data from the Large Electron-Positron Collider (LEP), after the start of the Large Hadron Collider (LHC), the IMC switched to measurements with data from all major LHC experiments. Uta Bilow and Kenneth Cecire have been encouraging new institutes to join, offering support and advice; under their long-term coordination of the programme, the IMC have been expanding, reaching nowadays more than 13000 students each year, in masterclasses held by more than 200 institutes in 60 countries all over the world. Apart from the geographical expansion of IMC, the physics scope has become broader, with the addition of new measurements based on data from other experiments (Belle II, MINERvA).

In addition to the “traditional” international masterclasses, other activities were introduced by the two prize winners: Masterclasses for Girls on the occasion of the International Day of Women and Girls in Science; World Wide Data Day, when high school students are encouraged to analyse data at school, using simplified versions of the masterclasses packages, and discuss their results during a video conference with physicists. With the onset of the COVID pandemic, first the Big Analysis of Muons was introduced; in 2021 the format of the IMC was rapidly adapted, and almost all 2021 international masterclasses were held online.

While Uta Bilow and Kenneth Cecire promote particle physics mainly among high school students, Sascha Mehlhase (LMU München) brings the excitement of particle physics, through play, to a much younger audience. In 2011 he designed the LEGO model of the ATLAS experiment, roughly 50:1 in scale, consisting of 9500 pieces. As of now, 66 large and more than 100 small ATLAS models have been built and shipped to 18 countries and used extensively during outreach events. This led to the creation of the build-your-own-particle-detector outreach programme. In the last months Sascha has been organising, jointly with members of the ALICE experiment, an online workshop for German high school students, in order to design and build a LEGO model of ALICE.

All members of IPPOG were delighted and proud to find out that this year’s EPS Outreach Prize has been awarded to three of its members. This well-deserved prize is also, in a broader sense, a recognition of the efforts of the IPPOG Collaboration to bring the wonders of particle physics to broad audiences across the globe.