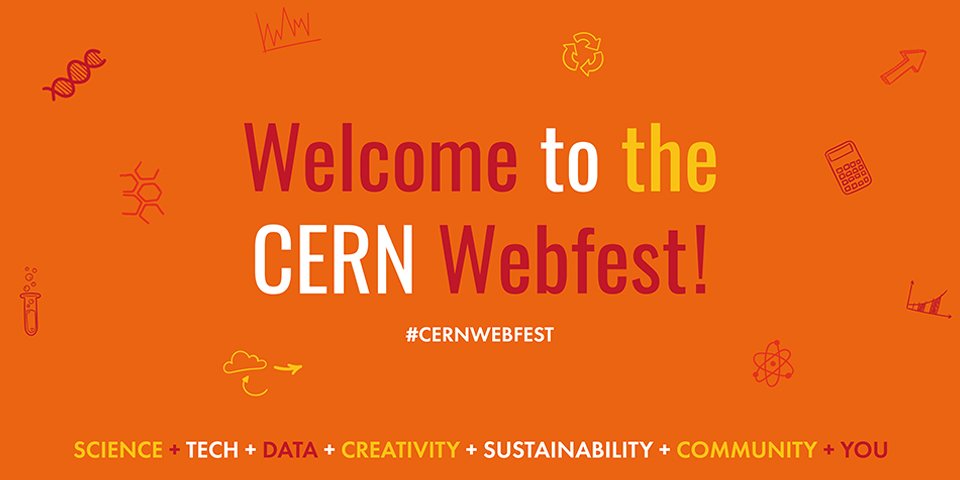 The 10th edition of CERN's Webfest took place on the weekend 21-22 August. Founded by François Grey and Ben Segal, the CERN Webfest was launched for the first time in 2012. Ever since it has been organised every year, with last year's and this year’s edition taking place online. The Webfest is CERN's annual hackathon, and it brings together creative minds to work on innovative projects based on open web technologies; the name hackathon comes from combining the words hacker (clever programmer) and marathon (an event marked by endurance).

300 people registered for the event – coming from 63 countries across the globe – and they formed small teams who came together virtually and worked, combining their skills, on 22 different projects. This year's theme was "science, society, sustainability" and the participants were encouraged to work on projects supporting UN's sustainable development goals. The participants worked hard to develop innovative apps, hardware and other tools, summarizing and presenting their work via a one-minute video. In parallel, during this very dense weekend, they had the opportunity to participate in workshops, stretching exercises and a fun quiz.

One project is selected every year as winner. The eight jury members had a hard time choosing and from the wide spectrum of innovative ideas, all aiming to contribute to improving life, they selected a number of projects which were presented during the closing session: an alarm system for victims of domestic violence; a website with clear information about nuclear energy; an app that sends alarms in case of wildfires; an app detecting health deficiencies by taking photos of body parts; a website for educational resources; a system using artificial intelligence to accelerate the learning process.

The overall winner was a project that uses crowdsourced design and 3D printing to create tools for disabled people. During the Webfest the winning team created a prototype attachment helping those people with malformations of the hands (ectrodactyly and syndactyly) to pick up a drinking bottle. The winning team consisted of Noor Afshan Fathima (CERN technical student at IT), Komal Kedarnath, Mehdi Golbaz (CERN openlab summer student) and Noor K. Kubra, all from India.

"The Webfest was a fantastic experience for all of us. It was so inspiring to meet all these people from across the globe who are so passionate about technology — and how it can be used to make the world a better place", said Andrew Purcell, from CERN openlab, one of the main organisers of the event. Indeed, many of the participants stressed how much they enjoyed meeting virtually people from all over the world, finding out about them and working with them.

Given the success of the online Webfest, the organisers have decided to hold next year's edition again online.