A novel approach to studying nuclear reactions with exotic beams 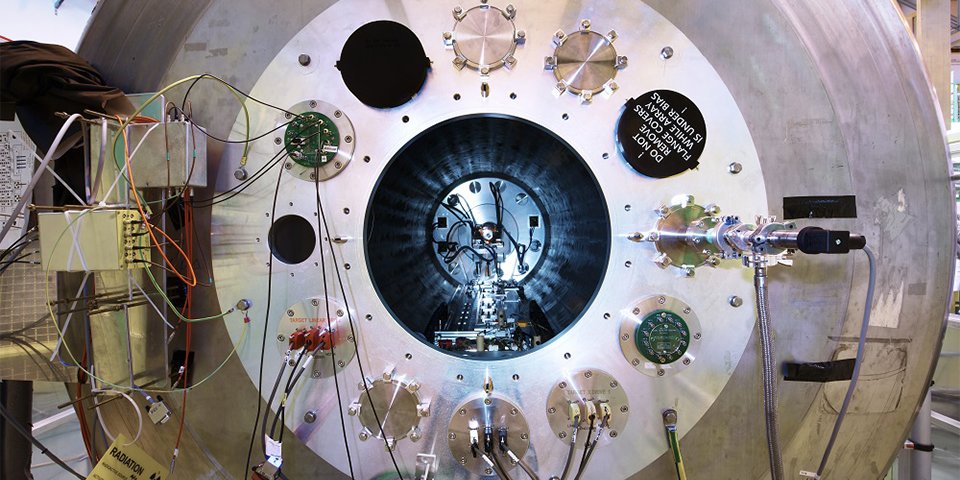 The ISOLDE Solenoidal Spectrometer: a 4-T hospital MRI magnet that has been repurposed as a spectrometer for nuclear reactions. Flanges have been added to the ends of the magnet to allow the bore to become a vacuum chamber, which houses a hollow array of double-sided silicon strip detectors on the axis. (Credits: CERN).

The ISOLDE Solenoidal Spectrometer (ISS) is midway through a successful campaign at the ISOLDE Facility at CERN studying the single-particle nature of exotic isotopes.

At radioactive beam facilities like ISOLDE, exotic nuclei are manufactured with proton-neutron ratios very different to isotopes found in nature. These radioactive nuclei are used in a broad range of science from fundamental nuclear physics through to probing solid-state environments within new materials.

If exotic nuclei are accelerated, they can be used to induce nuclear reactions. Such reactions shed light on nuclear structure away from stability and enable sensitive measurements of the motion of nucleons inside the nucleus, thus testing theoretical understanding of this complex many-model system bound by the strong nuclear force. Some are relevant to nuclear processes occurring in astrophysical sites, such as supernovae, X-ray bursters and neutron-star mergers, where the chemical elements beyond lithium are made.

Reactions between stable isotopes have been studied for many years. A variety of methods were developed to measure the interaction of a beam of light-mass particles (such as protons or deuterium ions) with a heavier target. However, for most radioactive isotopes, there just isn’t time to manufacture a target before they decay. To perform studies, reactions must be inverted, using the heavy nucleus as the beam with targets containing the lighter species, such as deuterated polyethylene. This "inverse kinematics" makes the challenge of resolving individual nuclear states populated in the reactions much more difficult.

A solution is to perform the reaction inside a uniform magnetic field whose axis is along the beam direction. Particles emitted in the reactions undergo cyclotron motion in the plane perpendicular to the beam and their transverse motion transporting them along the axis. By making measurements of the particle energy and the position where these helical orbits spiral back onto the axis, the excitation energy of the residual nucleus can be constructed in a way that circumvents problems that would otherwise ruin the resolution. This pioneering concept was first suggested by John Schiffer, who sadly passed away this year after a long and distinguished career in nuclear physics. It led to Argonne National Laboratory's Helical Orbital Spectrometer, which inspired the development of ISS.

It turns out that a suitable magnetic field can be generated by a hospital MRI magnet. For the ISS, a redundant 4-T superconducting hospital MRI magnet was recycled with considerable cost savings compared to a bespoke system. It was installed at ISOLDE by a UK-led collaboration between University of Liverpool, University of Manchester, Daresbury Laboratory, and KU Leuven in Belgium. A half-metre long, hollow array of double-sided silicon strip detectors was installed in the magnet in 2020 – a difficult activity during COVID-19 restrictions.

Physics campaigns have focussed on neutron-transfer reactions, which are sensitive to the motion of a neutron added to the beam nucleus. A series of experiments have been undertaken to study evolution of the single-particle structure in exotic nuclei; to probe changes in single-particle driven modifications in nuclear shapes in neutron-rich magnesium isotopes; and to probe states in nuclei that are relevant to the astrophysical rapid neutron-capture (r) and rapid proton capture (rp) processes.

This is just the beginning of a rich programme of work using ISS with radioactive beams from ISOLDE and a third solenoidal spectrometer SOLARIS is being developed for the new US Facility for Radioactive Ion Beams.