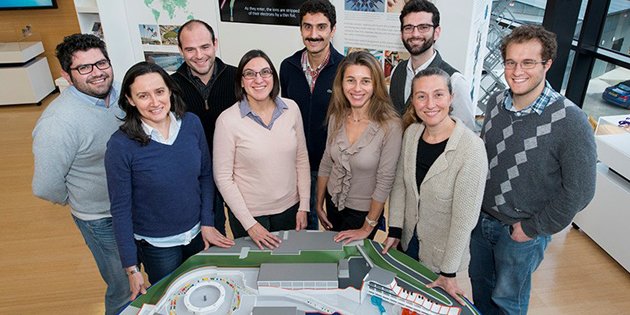 The Italian staff at ISIS celebrates the 30th anniversary of the CNR-ISIS agreement for Neutron Science.

The conference “Italy-UK partnership in Neutron Science: Thirty Years and Beyond”, held at CNR headquarters in Rome on 26 November 2015, was the opportunity to mark a milestone, thirty years of partnership in Neutron Science between the Italian National Research Council (Consiglio Nazionale delle Ricerche - CNR) and the Science Technology Facility Council (STFC)’s ISIS facility, as well as to discuss the future projects to be carried out within this successful collaboration. The partnership started off in 1985 with an intergovernmental agreement between the Italian Ministry of Foreign Affairs and the Foreign and Commonwealth Office. Since then it has expanded and grown stronger and stronger, with great enthusiasm on both parts, widening the areas of collaboration and exchange in neutron science and instrumentation.

The conference was co-organized by CNR, STFC, the British Embassy in Rome in collaboration with the School of Neutron Scattering "Francesco Paolo Ricci" (SoNS). The one-day meeting was attended by the British Ambassador to Italy, Christopher Prentice, Professor Luigi Nicolais, President of CNR, Professor Luisa Cifarelli, President of Centro Fermi, Professor Cristina Messa, Delegate for Research Infrastructures of the Italian Ministry of Research, and Dr Andrew Taylor, Executive Director from the UK Science and Technology Facilities Council, together with other leading Italian and UK scientists.

Why neutrons? Neutrons tell us where atoms are and how they are moving. By studying how materials work at the atomic level, one can better understand their every-day properties – and so make new materials taylor-made for particular uses.

Luisa Cifarelli's lecture addressed how it all began and the birth of research with neutrons in Italy, from the discovery of the neutron by Chadwick, in 1932, to the famous experiment by Fermi where it was found that neutrons that have been slowed down when passing through substances rich in hydrogen, such as paraffin wax or water, are much more efficient in producing induced radioactivity in heavy elements (October 1934). Roberto Caciuffo revisited the rise of neutron science in Italy, dated back to 1957 when Edoardo Amaldi started a research programme to exploit the potential of neutron scattering techniques at Argonne National Laboratory, Brookhaven, Oak Ridge, Chalk River and Harwell, with a team of young scientists, Giuseppe Caglioti, Antonino Paoletti and Francesco Paolo Ricci.

Lectures of keynote speakers traced the history of the conception and evolution of neutron science, highlighting some of their major achievements over the years, and the wide variety of contributions in science and technology that Italian scientists have made at the ISIS facility and elsewhere, as well as future developments in neutron science at ISIS and in Europe. These spanned a very wide range of science areas from fundamental materials investigations to biomaterials, materials for energy and cultural heritage studies, including the development of significant instrumentation and techniques which have benefited the wider neutron community.

The most recent CNR and STFC’s ISIS collaboration since 2008 has been named the PANAREA project and includes major Italian engagement in the ISIS Second Target Station ChipIR beamline, which will be used to study accelerated radiation effects on electronic devices, and IMAT beamline which will be used for neutron imaging and diffraction in materials.

The conference was an opportunity to pay a tribute to and acknowledge the many scientists who, over the years, turned this I-UK collaboration into excellent research, contributing to the economy, culture and social well-being of our society.