Highlights of the IYL2015 Closing Ceremony 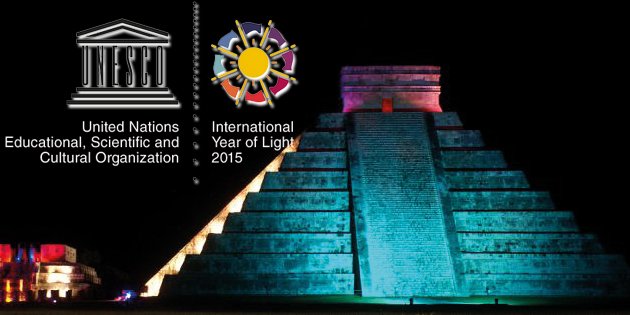 The United Nations declared 2015 to be the International Year of Light (IYL2015), "to raise awareness of how optical technologies promote sustainable development and provide solutions to worldwide challenges in energy, education, agriculture, communications and health".

After an impressive programme of celebrations, which took place in 2015 all over the world, with workshops, exhibitions etc., the Closing Ceremony was called in the city of Merida, Yucatan, 4-6 February 2016, organised by John Dudley and Ana Maria Cetto, with the support of the IYL2015 Secretariat based in ICTP-Trieste and led by Joe Niemela. President Prof. Luisa Cifarelli could not attend and sent me to represent the Italian Physical Society which I did very gladly, coming back to this colorful colonial town, at the center of a region rich in archeological Maya sites, such as Chichen Itza or Uxmal, and known for its yucateca cuisine, a tasty combination of hot pre-hispanic and hispanic flavours.

To the particle physicist, light evokes the particle mediating electromagnetic interactions, the photon, on a par with other equally elementary particles such as the intermediate vector bosons, electrons or quarks. The UN resolution clarifies, however, that celebrations regarded more specifically the carrier of optical phenomena, associated by J. C. Maxwell with the oscillations of electric and magnetic fields and only later, after the quantum of action of M. Planck, recognised by A. Einstein to have a corpuscular nature, the gigantic second step towards a full quantum theory of matter and radiation.

Thus, for three days, I found myself fully immersed in what we like to call the "low energy domain", with light, from the ultraviolet to the infrared down to microwaves and radio waves, being the protagonist of innumerable phenomena in physics, astronomy, engineering, optics, physiology, medicine, to name just a few.

After the theory of General Relativity, in 1916-1917, Einstein came back to the interactions of photons with matter and discovered that an excited atom irradiated with a photon in tune with the energy difference may radiate an additional photon in the same quantum state of the initial one. Einstein’s stimulated emission is the basis of the Maser, realized by Charles Townes in 1954, and later evolved into visible light with the LASER, realized in the early sixties by Maiman, following the work of Gould, Schawlow and Townes. Today, the laser, even more than the transistor, is pervading almost any aspect of our life.

The importance of photonics, the new photon-based technologies, was underlined in the very opening talk by Shuji Nakamura, Nobel Prize for Physics 2014, who illustrated the invention of the first highly efficient blue LED (Light-Emitting Diode) in 1993. Nowadays, III-V nitride-based LEDs have become the most widely used light source in many applications. The LED light sources are more than ten times more efficient than incandescent bulbs, and they may last for 50 years. As underlined by Nakamura, the use of LEDs has a major impact on energy saving and therefore on the environment. At their current adoption rates, by 2020, LEDs can reduce the world’s need for electricity by the equivalent of nearly 60 nuclear power plants!

The talks that followed gave a fair representation of the panorama emerged in the year of light, with many interesting talks, organized in plenary and parallel sessions. I can report only about a few talks, among those that impressed me most.

The breadth of laser technologies was in evidence in the talk of Prof. Noureddine Melikechi, Delaware State University and NASA's Mars Science Laboratory Mission, who illustrated laser applications in cancer’s diagnostic and cure as well as laser utilization in the Curiosity Rover Mars mission to explore the geology of Martian rocks. After its successful landing on Mars in August 5th, 2012, the Curiosity Rover has been working for more than 1300 sols (i.e. Martian days). A laser gun on board points to a chosen rock and vaporizes a small quantity of rock material which becomes incandescent and emits light. Rover’s spectroscope analyses the light, to reconstruct the nature of the rock. In this way, evidence has been obtained that the floor where Curiosity is working is made of sedimentary rocks, an indication that, order of 1 billion years ago, rivers were flowing in lakes and perhaps oceans, making Mars a wet planet. For the enchantment of the public, Prof. Melikechi showed a computer reconstruction of a shallow river flowing in the Martian landscape captured by Curiosity.

On a completely different domain, Sir John Pendry (Imperial College London) brought us in the intricacies of materials with artificially designed refraction indexes. A new class of materials has created some extraordinary possibilities such as negative refractive indexes and lenses whose resolution is limited only by the precision with which we can manufacture them. The aim is to make light to curve around a certain region of space and then continuing in the original direction. In this way, that region of space is effectively segregated from light and the objects contained in it would be essentially invisible. The new materials, named metamaterials, have properties equally determined by their internal physical structure as by their chemical composition, and the radical new properties to which they give access promise to transform our ability to control much of the electromagnetic spectrum.

Light, in all its manifestations at the different wavelengths is our main probe into the structure of the Universe. Prof. John Mather, Nobel Prize for Physics 2006 with George F. Smoot for the results of the COBE satellite, took us in a fascinating walk back in time, by using light to see the Universe as it was when light was emitted, almost all the way back to the first moments. Hubble discovered the expansion of the Universe with a telescope, the primeval fireball was seen with the COBE satellite, and now with the newest telescopes, next the James Webb Telescope of NASA, we are learning about the origins of stars and planets, hoping to find life elsewhere, all by using light at many wavelengths. Mankind, from the most ancient times, has rightly considered light as the very source of energy and life and speculated on the origin and properties of light and vision. Two talks brought us testimonies of studies of the past, not so well known as those of the scientists of ancient Greece.

Prof. Ling-An Wu, Institute of Physics, Chinese Academy of Sciences, Beijing, recalled the contribution to Optics of Mo Zi, born around 470 b.C.. The Book of Mo Zi, one of the earliest existing treatises in China on logic, geometry, optics and mechanics, presented the basic concepts of linear optics. Based on actual experiments, there are descriptions of the straight line propagation of light, reflection of light by planar, concave and convex mirrors, and the pinhole camera. The refractive index of water was measured to be 1.25, which is not bad for the times. Later, Liu An (179-122 b.C.), also compiled several works where optical devices are mentioned, such as burning glasses made of ice, and the earliest surveillance periscope.

We owe the Arab scientists of the Middle Age many fundamental contributions to the advancement of optics and of the theory of vision. Prof. Vasudevan Lakshminarayanan, University of Waterloo, Canada, and University of Michigan, USA, illustrated the work of Ibn al Hytham (Bassora, Iraq, 965 – Cairo, Egypt, 1040). His book, Kitab al-Manazir (Book of Optics), extended the work of Hero and Ptolemy and succeeded in combining geometrical optics with the anatomy and physiology of vision. Thus he can be considered to be the father of the science of Physiological Optics, a term coined by Herman von Helmholtz in the 1860s. A pioneer of the experimental method, Ibn al Hytham seems to have been the first writer to state that perception takes place in the brain not within the eye itself. On the basis of observation and experiment, e.g. on the observation that intense light injures the eye, he definitely adopted the intromission theory of vision - we see the objects because of light emanating from them which enters in our eyes - as opposed to the emission theory - rays emanate from the eyes and are intercepted by visual objects which send them back to us (this is how bats see in the darkness and also how the X-ray vision of Superman, allowing him to see inside objects, is explained in a famous cartoon). Emission theory was championed by several Greek scientists, including Euclid and Ptolemy, but not Aristotle and Galen. In the western world the debate was still existing at the time of Newton and Locke, obvious defenders of the intromission theory.

In conclusion, I appreciated very much the initiatives that took place in the Year of Light and in the Closing Ceremony. They produced a very representative mix of fundamental and applied research, and have illustrated very impressively what science can do for our society. All sciences.