Can a solid be superfluid? 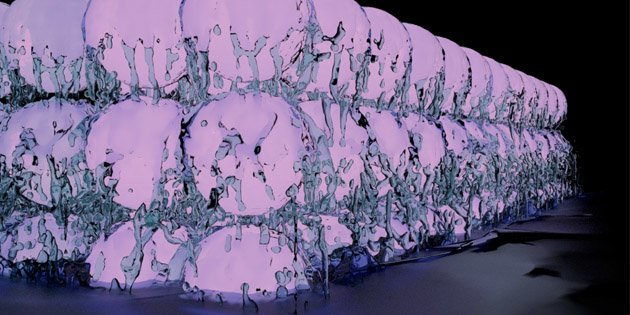 Artistic illustration of a supersolid state, in which the properties of a frictionless fluid and a crystalline state coexist.

"Can a solid be superfluid?" With these words in 1970 A.J. Leggett, 2003 Nobel Laureate in Physics, entitled a paper pointing out the possible existence of a paradoxical state of matter featuring both the crystalline order of a solid and the frictionless flow of a superfluid. For almost 50 years, scientist such as Andreev, Lifshitz, Thouless and others have been puzzled by the existence of this exotic phase. In the original proposal by Thouless for solid-He4 it was envisioned that the vacancies of the crystal, due to its particularly high zero-point motion, could undergo Bose-Einstein condensation at low enough temperatures and therefore form a superfluid. In his pioneering work Leggett suggested that such a supersolid in a rotating bucket would show a reduced rotational moment of inertia due to the finite fraction of superfluid atoms that would not participate to the classical rotation.

These ideas were considered purely speculative for many years, until in 2002 Kim and Chan at Penn State University reported measurements of reduced rotational moment of inertia of a rotating bucket of solid-He as supporting evidences for supersolidity. The debate on their experiment kept on going and triggered similar experiments around the world until 2012, when Kim and Chan themselves repeated the experiment in a more controlled way and explained their previous observation by the superflow of liquid Helium through tiny cracks of the classical solid.

Meanwhile in 1995 research teams at JILA and MIT, led respectively by E.A. Cornell and C.E. Wieman and by W. Ketterle, had reported short one after the other on the first realizations of a Bose-Einstein condensate (BEC) with neutral atomic gases, opening up a completely new route to the study of ultralow temperature physics. Many other atomic species were Bose-condensed since then, and ultracold gases developed quickly as a promising framework to explore different aspects of condensed matter physics as well as a whole new kind of low-temperature phases. These systems also allow for a different approach to the supersolid phase: rather than trying to form a superfluid in a solid, one could try to crystallize a superfluid.

In 2010 in the group of T. Esslinger at ETH Zurich a lattice-supersolid was realized by shining a laser onto a BEC placed inside the optical mode of a cavity. The superfluid atomic gas can scatter light from that laser into the resonator and self-organize in the resulting optical lattice potential that modulates the superfluid density. Nonetheless the cavity boundary conditions force the solid position to take only a discrete set of values, i.e. it cannot form continuously in space (only a discrete spatial symmetry is broken).

In September 2016 within the same group a new experiment coupling a BEC to the crossing modes of two optical cavities was built by the author and colleagues. Exploiting the same self-organization mechanism of the atoms in the interference potential of the two cavities, a crystal can form in space no longer limited by the cavity boundary conditions. Therefore the crystallization can happen continuously in space and a supersolid phase is realized breaking a continuous spatial symmetry.

Few weeks later at MIT the group of W. Ketterle announced the discovery of another super solid phase realized by spin-orbit-coupled BECs in a 1D optical super-lattice.

While we could not answer the original question regarding solid-He, we nevertheless have answered another one: can a superfluid be solid? The answer is certainly yes.