N. 44 - Agosto 2017     The Cultural Association of Italians at Fermilab
DALL'ESTERO From abroad

The Cultural Association of Italians at Fermilab 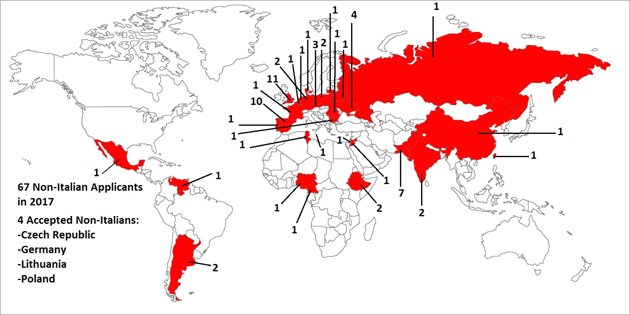 Flags showing the Institutes of students who have applied for an Oxford-Fermilab summer school in 2017.

The Cultural Association of Italians at Fermilab (CAIF), sponsored by the Italian National Institute of Nuclear Physics (INFN) and by the Italian Space Agency (ASI), is very successfully promoting Italian science and culture in the USA.

The Association was born at Fermi National Accelerator Laboratory (Fermilab) on November 4th, 1995 with a chamber music inauguration concert. Since then, CAIF hosted at the lab many events with Italian artists and has run the “Festa Italiana”, that is supported by the Fermilab Users Association. In 2017 CAIF offered lectures on Italian Opera, on Leonardo da Vinci and on the Italian Renaissance, as well as a course of Italian conversation.

The most important CAIF program is the summer training program for university students. The program is managed by Emanuela Barzi, Giorgio Bellettini and Simone Donati. Each year more than 20 graduate students are trained at Fermilab and three students are sent for two months to leading space science Institutions in the USA. The origin of this program dates back to 1983, when the physicists from Pisa recruited three students to spend 3 months at Fermilab to help in the construction of the Collider Detector at Fermilab (CDF). Later, engineering as well as physics students have been recruited from all Italian universities, as many as allowed by the available funds. In addition to the Fermilab program, since 2014 CAIF is funded by ASI to support each year a number of physics students (3 in 2017) for a two months-long stage in a space science laboratory in USA.

Since 2004, each year five students are being supported at Fermilab by the Departmentof Energy (DOE) in the frame of an exchange agreement with INFN. In 2007 an agreement was reached between the Scuola Superiore di S. Anna of Pisa (SSSA) and Fermilab, which are jointly supporting each year up to four students of the School. Hundreds of physics and engineering students were trained in all science and technical groups. Several former students have made their "Laurea" (Master Degree) project and started a research career at Fermilab. In 2015 the Italian program was included among the lab educational programs and has been funded at the yearly level of 23 students. In 2017 the students are in total 27, two being supported by SSSA and two by CAIF.

This Italian program has recently developed into The Fermilab Summer School of the University of Pisa, which grants European supplementary university credits.

This important bond with university education has been strengthened this year by an agreement reached between CAIF and the University of Oxford, establishing the “Moving Knowledge Summer School” , managed by Luigi Marchese and Ian Shipsey of Oxford, for an earlier 4 weeks-long stage offered to three students of the Fermilab program to be assigned to neutrino projects.

Sixty-seven applications were received for three available positions in this program, from qualified students of European Institutions and elsewhere (see figure). Since students of any nationality can be accepted in the Italian program, as a recognition of INFN interest for international cooperation, CAIF is supporting two additional students for the two months at Fermilab, one from Poland and one from Lithuania.

By means of its cultural events, and by running its very successful summer student school, CAIF is strengthening the prestige of the Italian culture and of INFN in the USA, and is contributing significantly to the Fermilab research program.