2019: the International Year of the Periodic Table of Chemical Elements 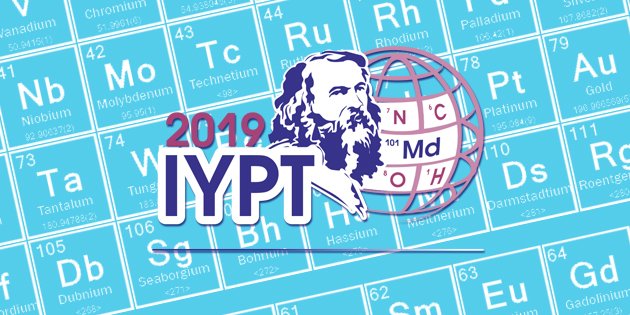 On December 20th, 2017, the United Nations General Assembly during its 74th Plenary Meeting, at the 72nd Session proclaimed 2019 as the International Year of the Periodic Table of Chemical Elements (IYPT 2019).

In proclaiming an International Year focusing on the Periodic Table of Chemical Elements and its applications, the United Nations has recognized the importance of raising global awareness of how chemistry promotes sustainable development and provides solutions to global challenges in energy, education, agriculture and health. Indeed, the resolution was adopted as part of a more general Agenda item on Science and Technology for Development. This International Year will bring together many different stakeholders including UNESCO, scientific societies and unions, educational and research institutions, technology platforms, non-profit organizations and private sector partners to promote and celebrate the significance of the Periodic Table of Elements and its applications to society during 2019. The initiative of the IYPT was supported by the International Union of Pure and Applied Chemistry (IUPAC), the International Union of Pure and Applied Physics (IUPAP), the European Association for Chemical and Molecular Sciences (EuCheMS), the International Astronomical Union (IAU), the International Union of History and Philosophy of Science and Technology (IUHPS), and by more than 80 IUPAC National Adhering Organizations, academies of sciences, chemical societies, research institutions.

The International Year of the Periodic Table of Chemical Elements in 2019 will commemorate a remarkable series of important milestones in the history of the periodic table of chemical elements dating back 2800, 350, 230, 190, 150, and 80 years. Indeed, around 800 BC, an Arab alchemist named Jabir ibn Hayyan first isolated the chemical elements arsenic and antimony. In 1669, phosphorus was the first element to be chemically discovered by Hennig Brandt (German). In 1789, Antoine Lavoisier (French) published a list of 33 chemical elements grouped into gases, metals, nonmetals, and earths. In 1829, Johann Wolfgang Dobereiner (German) observed that many of the elements when grouped in three (triads) based on their chemical properties and arranged by atomic weight, the second member of each triad was roughly the average of the first and the third (Law of Triads). In 1869, Dmitri Mendeleev (Russian) developed the modern periodic table as it is known today. In 1939, a French woman scientist, Marguerite Perey, discovered the francium based on filling gaps in Mendeleev's periodic table. It is also believed that lead smelting began at least 9,000 years ago in Africa, and the oldest known artifact of lead is a statuette found at the temple of Osiris on the site of Abydos (Egypt) dated circa 3800 BC.

The International Year of the Periodic Table of Chemical Elements will give a greater resonance to the celebration of the International Day of Women and Girls in Science on 11 February 2019, by highlighting women role models who substantially contributed significantly to the discovery of elements of the Periodic Table. The examples of Marie Curie, who was awarded Nobel Prizes in 1903 and 1911 for the discovery of radium (Ra) and polonium (Po), Berta Karlik for the discovery of astatine (At), Lise Meitner, who identified an isotope of protactinium (Pa), Ida Noddack for the discovery of rhenium (Re), and Marguerite Perey, who discovered the francium (Fr), will be celebrated in line with the gender equality priority of UNESCO in view of the advancement of the 2030 Agenda for Sustainable Development.

The Periodic Table of Elements truly is the province of all humankind. All the leading countries of the world have made their invaluable contribution, completing the Тable with new elements, studying and specifying the properties of the discovered ones. Тoday, for the first time in its entire history, the Тable looks most сomplete: all the elements of its 7 periods are disсovered and have aсquired their final names.

The Periodic Table is strongly linked to IUPAC’s mission. The chemical elements are crucial for humankind and our planet, and for industry. At the same time, it is important that whilst they are used to give added value and products necessary for our civilization, this is done in a sustainable way. In particular, awareness is needed of the sustainability of the use of scarcer elements, which are often either diluted in the earth’s crust or only available in very specific locations. An International Year of the Periodic Table of Chemical Elements would give an opportunity to draw the attention of children through to senior adults to these aspects that are important for the future of our planet, whilst also celebrating the genesis and development of the periodic table over the last 150 years. Other activities will also be organized making full use of the extensive network of IUPAC members.

The events of the IYPT will enhance the understanding and appreciation of Periodic Law and chemistry in general among the public; promote the role of chemistry in contributing to solutions to many global problems, such as climate change and the preservation of natural resources; promote awareness of the interdisciplinary nature of twenty-first century science, and emphasize how interactions between different thematic areas of the basic sciences will be increasingly needed in future research and education, and in the achievement of the 2030 Agenda for sustainable development; enhance international cooperation by coordinating activities between learned societies, educational establishments and industry, focusing specifically on new partnerships and initiatives in the developing world; establish durable partnerships to ensure that these activities, goals and achievements continue in the future beyond the International Year of Periodic Table of Chemical Elements.