N. 50 - Febbraio 2018     Inauguration at CERN of the new ALICE exhibition
DALL'ESTERO From abroad

Inauguration at CERN of the new ALICE exhibition 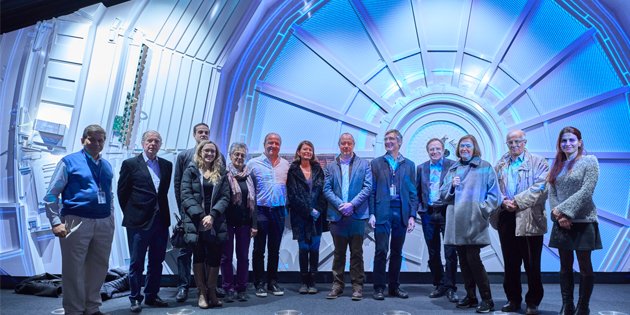 On 17th January 2018 the ALICE (A Large Ion Collider Experiment) collaboration inaugurated a new exhibition, which is now a part of its Visitor Centre located at the ALICE experimental site (Point 2 of the Large Hadron Collider LHC).

The exhibition was designed by the Spanish company Indissoluble – the same that made the permanent CERN exhibition “Microcosm”. The CERN Education, Outreach and Communications group supported this project during the whole process of conception, design and realisation. Designed mainly for the general public and High School and University students, its goal is to communicate to visitors the physics as well as the tools and methods employed by the ALICE experiment.

Combining modern technology such as video mapping with real detector items, the exhibition aims to fascinate the visitors and give them an immersive experience of a particle physics experiment. It consists of three main components: a full-scale mock-up of ALICE, with detector items embedded in places corresponding to their real position in the experiment; showcases containing additional exhibits as well as three touch screens displaying information and photographs; and a simulation of a periscope, two computer-controlled cameras installed underground, connected with three screens, offering to the visitors a real-time view of the cavern. The exhibits have been chosen in such a way as to be representative of different technologies and to cover the main areas of particle detectors: tracking, particle identification and calorimetry.

One of the highlights of the exhibition is the introductory video, projected on the mock-up and the adjacent wall; in seven minutes, it presents the basic concepts of particle physics, Big Bang cosmology and the physics of ALICE – the study of the Quark Gluon Plasma; it brings the detector to life with the method of projection mapping; it explains the different components of the experiment and their role, as well as the whole procedure from data taking to publication of results. It also gives an overview of the history of the experiment and the collaboration.

The exhibition is now open to guided visits, possible all the year round, unlike underground visits, which are only possible during the end-year technical stops or long shutdown periods of the Large Hadron Collider LHC. Training sessions for guides are being organized. It will soon be included in the official itineraries of the CERN visits service, thus bringing the public closer to the fascinating physics of heavy ion collisions, which is an integral part of CERN’s rich research programme.