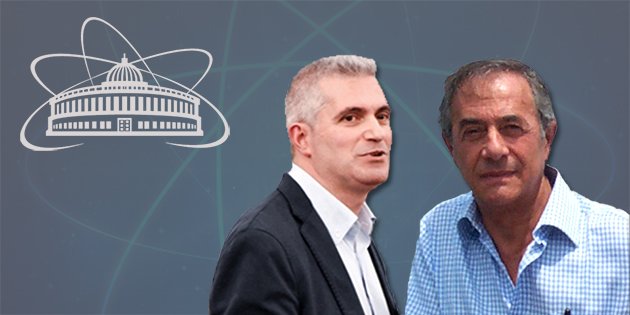 On the left: Eligio Lisi, on the right: Gianluigi Fogli.

The most prestigious prize for Physics of the Joint Institute of Nuclear Research, Dubna (Russia) was awarded for 2017 to Gianluigi Fogli and Eligio Lisi, "for their pioneering contribution to the development of global analysis of neutrino oscillation data from different experiments". The jury of the prize was composed of A. Olshevskiy, S. Bilenky, L. Maiani, A. McDonald (Nobel Prize) and Y. Suzuki.

Fogli and Lisi started their analysis of the experimental data of neutrinos from the atmosphere, the Sun, supernovae, from accelerators and reactors back in the 1990s, aiming at understanding neutrino oscillations and flavour conversion in matter. In the mid 1990s these phenomena, which are beyond the Standard Model, where not yet firmly established experimentally, but, with the years, the amount and precision of experimental data constantly increased. Very soon, Fogli and Lisi stressed the urgency to abandon the prevailing two-flavour oscillation scenario. Indeed, all three neutrinos take part in the oscillations and the elements of their mixing matrix are strongly correlated in the different types of experiments.

Together with the group in Bari that was growing under their leadership, they developed a set of computer programs carefully designed to extract the mixing angles and the square mass differences, with in input the data from all the experiments and with due consideration of their statistical and systematic uncertainties and correlations.

An important result of this approach was the hint found in 2008 that also the smallest of the mixing angles θ13 is different from zero, in contrast with several theoretical schemes. Four years later, reactor experiments established that the hint was correct. This fact is crucial for the existence of CP violation in the lepton sector. Today, a similar hint from the global fit points to the so called “normal mass hierarchy” and to a large value of the CP-violating phase. We need to wait again, hopefully just a few years, to know whether these hints will be experimentally confirmed or not.