The history of the EPS 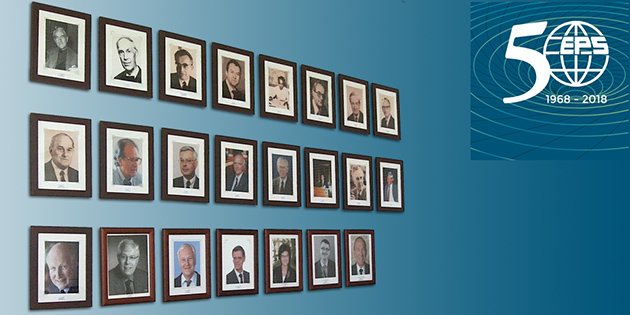 The European Physical Society was founded in Geneva, Switzerland in 1968 through the inspired leadership of Gilberto Bernardini (then CERN Research Director) «as a further demonstration of the determination of scientists to collaborate as close as possible with a view to making their positive contribution to strengthen European cultural unity»

The origins of the European Physical Society date back to the Italian Physical Society's Annual Congress in Bologna in November 1965 where Gilberto Bernardini, then Director of the Scuola Normale Superiore of Pisa, persuaded his colleagues of the crucial importance of such an organisation.

Alternative structures were proposed, namely a completely new society based on individual membership, or a federation of existing national bodies. A compromise agreement was reached that membership would be based on both individual membership and collective membership of National Societies, and that laboratories could also become members. From the very beginning Eastern Europe was given detailed attention.

It was first agreed that the Society be founded at an inaugural conference in Florence in autumn 1968 but due to a lack of time to arrange the conference for autumn that year, it was agreed that instead the Society would be legally founded in Geneva in September 1968. Switzerland and, in particular, Geneva, seemed a logical choice of headquarters and official seat for the Society, being the home of very important international organisations.

As written by Rüdiger Voss, current EPS President, in a recent article on the CERN Courier: «The year 1968 marked a turning point in the history of post-war Europe that remains engraved in our collective memory. Global politics were marked by massive student unrest, the Cold War and East-West confrontation. On 21 August the Soviet Union and other Warsaw Pact states invaded Czechoslovakia to crush the movement of liberalisation, democratisation and civil rights, which had become known as the Prague Spring. Against this background, it seems a miracle that the European Physical Society (EPS) was established only a few weeks later, on 26 September, with representatives of the Czechoslovak Physical Society and the USSR Academy of Sciences sitting at the same table.»

On 26 September 1968 in the morning, the Constitutive Assembly of the Society took place in the CERN Council Chamber where the EPS Constitution was signed by 62 individual members and 20 national societies, academies and research institutions, including CERN.

In the afternoon of the same day, 26 September 1968, the Official Foundation Ceremony took place in the Aula Magna of the University of Geneva.

From the left: Prof. G. Bernardini (President of the Executive Committee of the Society), Dr. D. van Berchem (Rector of the University of Geneva) and Mr. E. Valloton (Head of the Scientific Section of the International Department of the Swiss Ministry of Foreign Affairs) in the Aula Magna of the University of Geneva. Picture taken from CERN Courier, vol. 8, issue 10 (1968).

In his talk at the EPS inauguration G. Bernardini , who became the first EPS President, stressed the importance of CERN in the establishment of the EPS, both as an experience of international cooperation in Europe and as an existing infrastructure for the newborn Society, the issue of the existing and future international laboratories in Europe, the issue of the many physics journals in Europe, the need for strengthening the European cooperation to counter the brain drain from Europe to the USA, the determination of scientists to collaborate in order to strengthen the European cultural unity and the crucial need to secure the active participation of the Eastern European countries. It is worth recalling in this respect that an EPS branch secretariat was established in Prague at the Academy of Sciences (until 1973) and that the EPS logo was designed by the Czechoslovak Physical Society.

Today the Society has its seat in Mulhouse and is hosted by the Université de Haute Alsace. The EPS has 42 Member Societies ranging from Iceland to Turkey, and extending to Israel, and representing more than 130,000 members. EPS Member Societies vary widely in different aspects, first in the number of members ranging from less than 50 to over 60,000. In addition to its 42 Member Societies, the EPS encompasses over 40 Associate Member Institutions (mostly major research institutions including CERN) and over 3500 Individual Members (the scientific «core» of the Society). The EPS has also bilateral agreements with over 20 Collaborating Societies (APS, AAPPS, EuCheMS, etc.).

The EPS promotes excellent physics research through its Divisions (12) and Groups (7). The renown of EPS prizes, conferences and workshops is very high: these EPS meetings, some of which jointly organized with Collaborating/Member Societies, remain as model meetings for the whole international physics community and gather several thousands of attendants per year.

The EPS has a number of Action Committees to supply a European view on important questions relating to physics and to society at large to act as a catalyst for bringing together physicists in different fields and different countries. The EPS provides a forum for the physics community in Europe to discuss issues important to physics research and education, and the impact of physics on the society at large, such as: research and science policy, Europe Horizon framework programme and research funds, European cooperation, International cooperation, physics for developing countries, energy and environment, education and opportunities for the young, physics in industry, gender issues, European integration, Open Access and Open Data.

Through its broad membership base, the EPS represents the views of the physics community in Europe and provides information of use to the policy makers and the general public to understand these issues from the point of view of physics. To be more efficient in interacting with the EU political leaders the EPS has opened in 2016 an Office in Brussels with a consultant for EU affairs. In addition, the EPS has created an Advisory Board on Science Policies (ABSP) whose members will be consulted to provide scientific advice on specific policy issues.

The EPS makes the voice of the physics community heard loud and clear, collaborating with its partner organisations towards common goals. Hence, as at the time of its foundation, the EPS provides scientific bridges to «preserve the scientific unity in physics».

Homepage: Portraits of the 23 past Presidents of the European Physical Society on the wall of the EPS Headquarters in Mulhouse. (Courtesy G. Gunaratnam).