1937, Palermo: the discovery of technetium 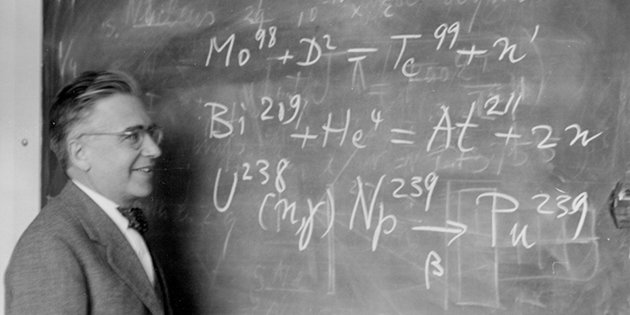 The technetium (from τεχνητός in Greek - technetium in Latin, meaning artificial) is the first artificial chemical element to be isolated by man. This was first achieved by Emilio Segrè (1905-1989) and Carlo Perrier (1886-1948) at the Istituto di Fisica, now Department of Physics and Chemistry, at the University of Palermo, via Archirafi 36.

The technetium, chemical symbol Tc and atomic weight 43, was isolated out of a molybdenum foil that had been part of the deflector in the cyclotron of the Lawrence Berkeley National Laboratory in California, mailed by Ernest Lawrence to Segrè in Palermo. Technetium, which should be present in the Earth’s crust in minute concentrations, has been found in the spectrum of S-, M-, and N-type stars. One of the strongest pieces of evidence for the theory of stellar nucleosynthesis has been the observation of absorption lines of element technetium from distant stars. Its presence is leading to new theories of the production of heavy elements in the stars. When stars produce technetium, they do it throughout a very subtle process if compared to a simple fusion of elements. Indeed, there is a very steady process that takes place in certain classes of stars, the so called s-process, where slow neutrons are captured. Technetium plays an important role in present day nuclear medicine as the Tc-99m (“m” indicates that this is a metastable nuclear isomer) is used in radioactive isotope medical tests.

In the summer of 1936, Emilio Segrè, a former student of Enrico Fermi and newly appointed Professor of Experimental Physics at the University of Palermo visited the United States, first Columbia University in New York and then the Lawrence Berkeley National Laboratory in California. He persuaded Lawrence to give him some discarded cyclotron parts that had become radioactive. Then, in Palermo, Segrè tried to identify the origin of the radioactive properties of such molybdenum foil. According to the knowledge of nuclear physics at that time, Segrè restricted the field of possible products of the bombardment of molybdenum to three elements, niobium, tantalum and element 43. At the end of an elaborate series of separations and purifications, conducted in collaboration with the chemist Carlo Perrier, it was possible to demonstrate, by exclusion, that the radioactivity was due to the element 43. Not being able to isolate a substantial amount of technetium, Segrè and Perrier postponed the announcement of their discovery until, two years later, together with the American chemist Glenn Theodore Seaborg (1912-1999), Segrè obtained with a cyclotron the fingerprint X-ray spectrum of metastable isotope technetium-99m.

In conjunction with the celebrations that will take place in 2019, concerning the International Year of the Periodic Table of Chemical Elements, proclaimed by the UN General Assembly and UNESCO 150 years after Dmitry Mendeleev's discovery of the periodic system and the Table (a masterpiece of science to classify the chemical elements), on February 18, 2019 the Department of Physics and Chemistry hosted the award ceremony of the plate of "Historic Site" of the European Physical Society, recalling the discovery of the technetium by E. Segrè and C. Perrier. The ceremony took place within a scientific workshop on the discovery of the technetium and on the related historical events.